The Honduran presidential election will be held since November 28, 2021, which will be held simultaneously with regional and parliamentary elections. The results of this year's presidential election are different from previous years, because Xiomara Castro from the opposition party managed to win.
In fact, the candidate from the Libertad y Refundación Party was able to get more than 51 percent of the votes. Meanwhile, his main opponent from Partido Nacional de Honduras, Nasry Asfura, only got 35 percent of the vote.
Xiomara Castro's victory helped end the right-wing party's dominance in Honduras for more than 12 years. In fact, this is a sign of a political shift in the Latin American region to the left, after the victory of several left-wing presidential candidates.

1. Xiomara Castro is the original character of Tegucigalpa

The president-elect of Honduras whose full name is Iris Xiomara Castro Sarmiento was born in Tegucigalpa on September 30, 1959. Castro is the second of five children who lived and grew up in the capital city of Honduras.
Meanwhile, the 62-year-old president was educated at the San Jose del Carmen Institute and the Maria Auxiliadora Institute. He is known to have managed to get a Business Administration degree without going to college.
In 1976, Xiomara Castro married a politician named José Manuel Zelaya Rosales or who is often called Manuel Zelaya. After marriage, they have four children named Zoe, Hector Manuel, Hortensia Xiomara and Jose Manuel. 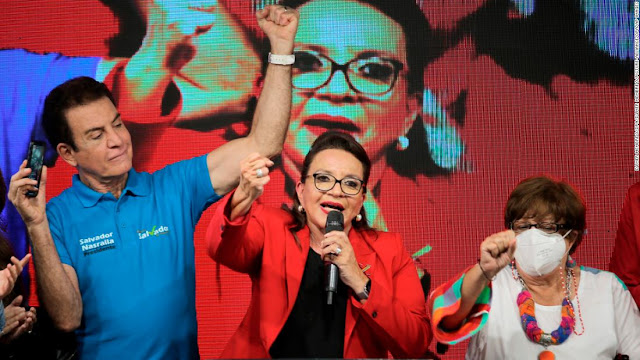 2. Wife of former President Manuel Zelaya who was overthrown in 2009

Castro's husband, Manuel Zelaya, is a leftist politician and former President of Honduras who served from 2006-2009. However, Zelaya was forced to step down from his post on 28 June 2009 following a military coup.
At that time, Zelaya was flown by the military to Costa Rica and the Honduran Parliament decided to remove him from the presidency. In fact, the 69-year-old former president was charged with 20 articles of law, including treason and abuse of power, quoted from Britannica.
The government's decision at that time was controversial and drew criticism from the United Nations. Meanwhile, the Organization of American States (OAS) also supported Zelaya by suspending Honduras' membership.

3. Started a political career as an activist within the Libre Party

Reporting from El Heraldo, Castro first started his career in politics after becoming an administrator of the women's branch of Partido Libre. This was intended to provide support to her husband who took part in the party's internal elections in 2005.
As a first lady, Castro also participates in social development programs and has collaborated with the United Nations with other first ladies in preventing and dealing with the problems of women living with HIV.
After Zelaya's ouster, he also proclaimed his rejection of the military coup in Honduras and took part in demonstrations with thousands of people on the streets. The protest was called the Frente Nacional de Resistencia Popular (FRNP) demanding the return of Zelaya.
After her husband returned to Honduras, Castro and Zelaya fled to the Brazilian Embassy in Tegucigalpa. This was done to avoid detention, prior to the approval of negotiations with the de facto government in the Central American country.

In 2012, Castro officially launched a political campaign at an event in the Santa Barbara Department. He managed to win as the main candidate chosen by his party to run in the presidential election in 2013.
However, at that time Castro failed to win the presidential election and was only perched in second place in the vote, after losing to Juan Orlando Hernandez.
Four years later, he competed again and Hernandez, again the incumbent candidate, won the 2017 presidential election. Although there were rumors that the election was full of fraud.
Meanwhile, in 2021 the situation was reversed and the left-wing party managed to win the majority of the Honduran population. This was also prompted by the revelation of the actions of President Hernandez's younger brother, who was apparently involved in the smuggling of drugs to the United States.
This success made Castro the first female president in Honduras. In addition, he has also freed Honduras from the far-right regime that has been in power for more than 12 years after the military coup incident, quoted from the BBC.

5. Ever promised to open diplomatic relations with China

Reporting from People, Castro vowed in his campaign to rid the Central American country of corruption, crime and depravity. In fact, he also mentioned that the scandal-plagued Hernández regime was a corrupt drug smuggling dictator.
In addition, Castro also promised to remove the full ban on abortion in Honduras. The reason is, so far the policy in Honduras prohibits all forms of abortion, even though it includes rape, incest, and pregnancies that put the mother's life at risk.
He did not stop there, he also promised to open diplomatic relations with China and close relations with Taiwan. Castro's victory is considered in China's favor, especially after Nicaragua made the same decision, reported by the Miami Herald.
However, Castro will face a big challenge in leading Honduras. Because the Central American country is being faced with issues of crime, violence, drug smuggling and population migration to the United States.