Taiwanese have rejected four referendums proposed by the Opposition to undermine President Tsai Ing-wen's government. The voting will be held on Saturday, December 18, 2021.
Ummatimes - The referendum defeat comes as Taipei faces mounting military and political pressure from Beijing, and is a boost for Tsai, who was re-elected in a landslide last year, to continue her vow against China.
China claims the democratically-ruled island as its territory.
Taiwan's main opposition party, the Kuomintang, or KMT, which has traditionally favored close ties to Beijing, is hoping to return in mayoral elections late next year. 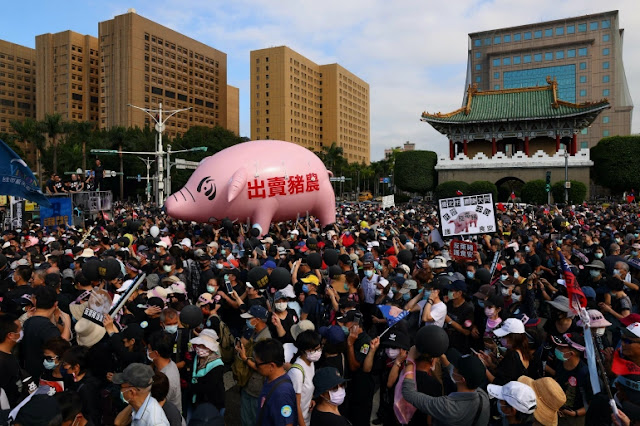 The two most controversial referendums asked whether to ban imports of pork containing the additive ractopamine for safety reasons, and whether to relocate a planned liquefied natural gas (LNG) terminal to protect coral reefs.
The government approved pork imports last year, hoping to remove a stumbling block to a free trade deal with the United States, where ractopamine is widely used, and show it is a reliable trading partner.
It said the LNG terminal would secure energy supplies for the semiconductor-producing island, which was hit by a power outage in May.
Government officials said the LNG terminal would be moved further offshore to minimize the impact on coral reefs, but Saturday's referendum called for a total relocation.
Turnout on Saturday was low, but the government welcomed the referendum defeat.
"Taiwanese people want to go out into the world, and are willing to actively participate in the international community," Tsai told reporters, referring to the pig vote.
His government hopes the results will also strengthen its case for joining the Comprehensive and Progressive Agreement for the Trans-Pacific Partnership, or CPTPP.
Asked about the vote, an official with the American Institute in Taiwan, the de facto US embassy in the absence of formal diplomatic ties, said: "We will continue to seek constructive engagement with Taiwan on issues affecting US exports of food and agricultural products."
KMT chairman Eric Chu, who took on the role in September with a promise to revitalize the party's fortunes, apologized for the failure.
"Don't be discouraged. Let's continue to work hard. We will always stand on the side of the people. We must always represent the opinion of the people and oppose the democratic dictatorship of the government," he said.
The cold weather could be the cause of the low turnout, he said.
The KMT has also asked voters to agree on a third issue, to restart nuclear power plants, saying it is the best way to ensure energy supplies. The government wants to stop nuclear power.