Today 30 Years Ago The Soviet Union Disbanded: Mikhail Gorbachev the Secretary General of the CPSU

Today 30 Years Ago The Soviet Union Disbanded: Mikhail Gorbachev the Secretary General of the CPSU

On December 25, 1991, Mikhail Gorbachev officially resigned as president of the Soviet Union. Exactly today 26 December 30 years ago, the country's parliament - the Supreme Assembly of the Uni
Soviet - officially recognized the independence of 15 new countries. It also means ending the existence of the Soviet Union on earth.
Mikhail Gorbachev was the last president of the Soviet Union, precisely the 8th president—although after that there was the name Gennady Yanayev who claimed Gorbachev's post for 2 days.
He was born with the name Mikhail Sergeyevich Gorbachev, March 2, 1931, Privolnoye, Stavropol kray, Russia, Soviet Union.
Ummatimes - Gorbhacev is the son of a Russian farmer in the Stavropol (kray) region in southwestern Russia. He joined the Komsomol (Young Communist League) in 1946 and drove the combined harvester on a state farm in Stavropol for the next four years.
According to britannica.com, in 1952 he entered the law school of Moscow State University and became a member of the Communist Party. He graduated with a law degree in 1955 and continued to hold a number of posts in the Komsomol and the regular party organization in Stavropol, rising to become the first secretary of the regional party committee in 1970. 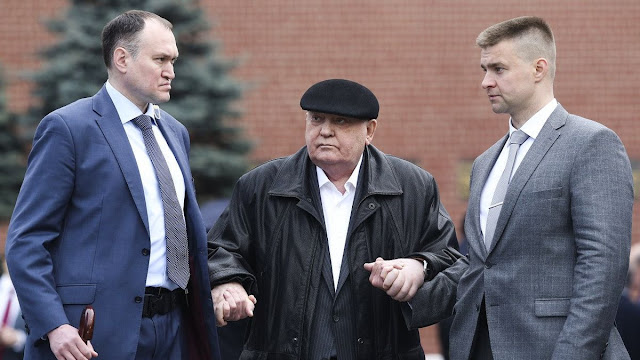 Gorbachev was appointed a member of the Central Committee of the Communist Party of the Soviet Union in 1971, and he was appointed secretary of the agricultural party in 1978. He became a candidate for member of the Politburo in 1979 and a full member in 1980.
Gorbachev was appointed general secretary of the Communist Party of the Soviet Union (CPSU) after the death of Konstantin Chernenko on March 10, 1985. It didn't take long for Gorbachev to immediately gather strength to improve the Soviet Union.
Its main domestic aim was to revive the stagnant Soviet economy after years of shifts and low growth during Leonid Brezhnev's reign (1964–82).
Further, to this end, he calls for the rapid modernization of technology and an increase in worker productivity. He tried to make the Soviet Union's complicated bureaucracy more efficient and responsive.