Former US President Donald Trump reportedly criticized Benjamin Netanyahu for congratulating Joe Biden on his victory in last year's election. Trump accused the former Israeli prime minister of disloyalty.
Ummatimes - Trump said he had helped Netanyahu in the Israeli election by changing the tradition of US policy regarding embassies and supporting Israel's claims to the territories they captured after the war. Trump claims he was rigged in the general election.
In an interview with Israeli journalist Barak Ravid this year Trump expressed anger at a video of Netanyahu congratulating Biden. The video is circulating on the internet. 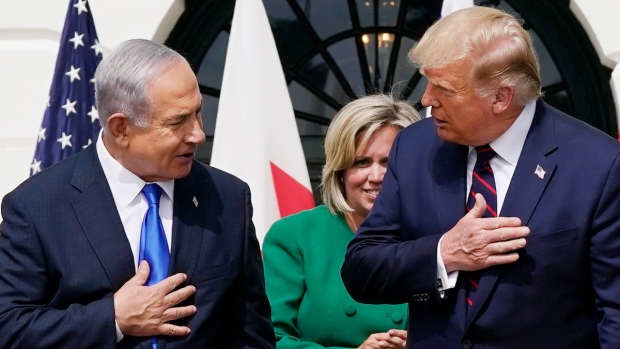 "No one has done more for Bibi, and I liked Bibi, I still love Bibi," Trump said using Netanyahu's nickname in an article published in the Yediot Aharonot newspaper, Friday (10/12).
"But I also love loyalty, Aunt can be quiet, she makes terrible mistakes," he added.
Netanyahu congratulated him 12 hours after Biden won the presidential election. Not only longer than any other world leader, in his tweets Netanyahu also did not mention Biden as president-elect and praised Trump.
Trump appeared to be furious with the video that Netanyahu released on January 20 the day of Biden's inauguration. In the video the former prime minister says he and Biden 'had a personal friendship for decades'.
"I haven't spoken to him since then, F--he," Trump was quoted as saying by Yediot Aharonot.
The Trump administration is providing Israel with unprecedented support. Trump recognizes Israeli settlements in the West Bank and recognizes Jerusalem as Israel's capital. After putting forward a Middle East plan that the Palestinians vehemently rejected, Trump brokered a deal to normalize relations between Israel and four Arab states.
Trump said his decision to recognize Israel's annexation of the Golan Heights helped Netanyahu win the April 2019 election. Israel captured the Golan Heights from Syria in the 1967 war. "I did it right before the election, which helped him a lot (Netanyahu)," Trump said.