The Crown Prince of the United Arab Emirates (UAE) Sheikh Mohammed bin Zayed Al Nahyan receives the visit of Israeli Prime Minister Naftali Bennett, Sunday (12/12). Bennett became the first Israeli leader to make an official visit to the UAE.
Ummatimes - Upon arriving at the Presidential Terminal of Abu Dhabi International Airport, Bennett was greeted by the UAE Minister of Foreign Affairs and International Cooperation Sheikh Abdullah bin Zayed Al Nahyan. “What a great welcome. I am very pleased to be here on behalf of my people (on) the first official visit of an Israeli leader here," Bennett said.
From the airport, Bennett immediately traveled to have a meeting with Sheikh Mohammed bin Zayed Al Nahyan. "We hope to strengthen this relationship," he said. 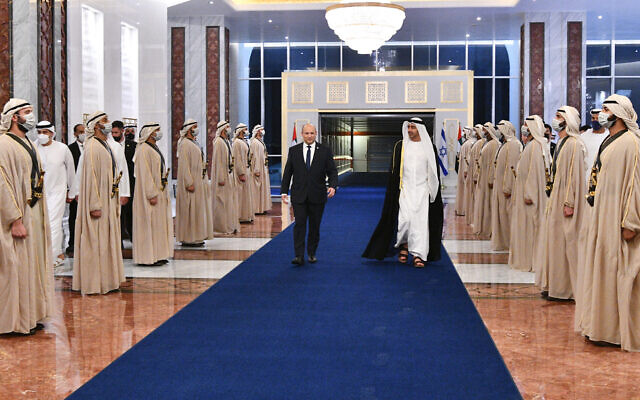 According to the Israeli prime minister's office, the economic and military fields will be the two topics of cooperation discussed with Sheikh Mohammed. Bennett's one-day visit to the UAE is history. He will be inscribed as the first Israeli prime minister to make an official visit to Abu Dhabi.
On September 15, 2020, Bahrain and the UAE signed a diplomatic normalization agreement with Israel. This was achieved thanks to US mediation and support under the leadership of former president Donald Trump. This normalization agreement is known as the Abraham Accords.
In addition to the UAE and Bahrain, the US is also helping Israel carry out diplomatic normalization with Sudan and Morocco. Washington removed Sudan from the list of countries supporting terrorism in exchange for its willingness to open formal relations with Tel Aviv. Then regarding Morocco, in return, the US recognized the country's claim to the disputed territory of the Western Sahara.
Palestine condemned the peace agreement made by the four Muslim countries. According to Palestine, what the four related countries have done is a "stab" to their struggle for independence.