The recent gross violations of human rights in Myanmar represent a worrying escalation of violence. This was conveyed by the United Nations Human Rights Office (UN) referring to reports that security forces killed and burned alive eleven people, including five minors.
"We are appalled by the alarming escalation of human rights violations in Myanmar," said spokesman for the UN High Commissioner for Human Rights Rupert Colville at a press conference on Friday (10/12).
Ummatimes - In the past week, he explained, security forces have killed and burned to death 11 people -- including five minors -- and rammed vehicles into protesters who were exercising their fundamental right to peaceful assembly.
Colville said that more than 10 months since Myanmar's military toppled the democratically elected government, the country's human rights situation was deteriorating and on an unprecedented scale.
The United Nations Human Rights Office lauds the brave and resilient people in Myanmar by marking Human Rights Day on Friday. They staged a universal silent protest against the military coup. 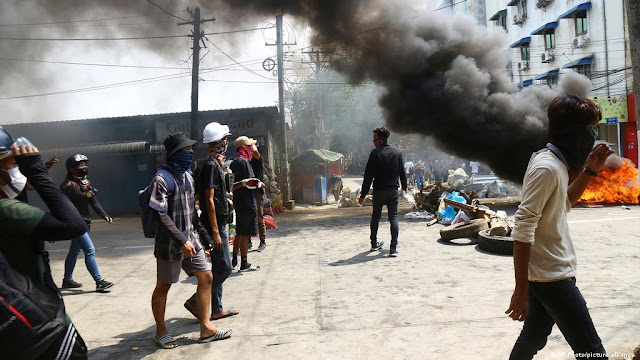 "Basically there are groups against the government who seem to feel they have no choice but to take up arms because there is no dialogue, no political resolution to the situation," Colville said, when asked if the conflict in Myanmar had turned into a civil war.
"And the military has increased its presence in various parts of the country in recent months, which we have marked."
On Tuesday (7/12), militia forces allegedly ambushed a Myanmar army unit with remote-controlled explosive devices in Salingyi Township in Sagaing region. Security personnel reportedly retaliated by storming the village of Done Taw and arresting six men and five minors - the youngest aged 14.
Villagers who said they saw fire coming from the area later found the burnt remains of 11 men. burning hut," Colville said.
In a separate incident on Sunday (5/12), security forces in Kyimyindaing Township, Yangon, rammed a vehicle into unarmed protesters and then opened fire on them with live ammunition, causing several casualties.
"These attacks are heinous, completely unacceptable, and disregard common human values," Colville said.
In recent weeks, the UN Human Rights Office has received numerous reports of villages being burned, including protected buildings such as places of worship and residential buildings. "Since the coup, General Min Aung Hlaing's forces have repeatedly failed to honor their obligations under the law. internationally to protect the people of that country," Colville said.
As a result, more than 1,300 people lost their lives and more than 10,600 others were detained. "This latest serious violation requires the international community to act decisively, unitedly, which redoubles efforts to hold the Myanmar military accountable for its actions and to restore democracy in Myanmar," Colville said.
Myanmar's military, known locally as the Tatmadaw, staged a military coup in February and jailed members of the civilian government. General Min Aung Hlaing, leader of the military regime, has appointed himself prime minister. He promised holding multiparty elections and lifting the state of emergency by August 2023. More than 1,000 people were killed while more than 5,400 others were arrested by junta forces, many of whom have been released.