The United Nations Educational, Scientific and Cultural Organization Unesco has included songket in Malaysia's Representative List of the Intangible Cultural Heritage of Humanity.
Ummatimes - The list of cultural heritages was decided at the 16th session of the Intergovernmental Committee for the Protection of Intangible Cultural Heritage which will be held online from 13 to 18 December 2021, according to the Unesco website, December 2021.
Mr Punchi Nilame Megaswatte, Secretary General of Sri Lanka's National Commission for UNESCO, chaired the annual meeting which brought together hundreds of participants – representatives of States Parties, non-governmental organizations, cultural institutions and other stakeholders – from around the world. 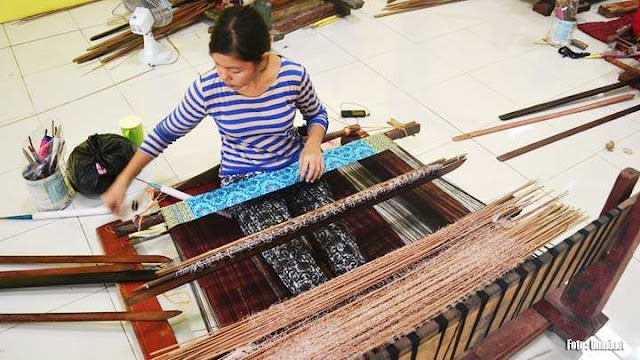 At this year's session, the Intergovernmental Committee for the Protection of Intangible Cultural Heritage included 4 elements in the List of Intangible Cultural Heritage that Needs to be Protected Urgently, and 39 elements in the Representative List of Intangible Cultural Heritage of Humanity.
Actually, apart from Malaysia, songket is also known as a traditional ethnic Malay dress in Indonesia, Singapore, and Brunei.
In a study, Susan Rodgers, Anne Summerfield, and John Summerfield stated that songket was associated with the Sriwijaya Kingdom and is still used by the people of Palembang and ethnic Malays in general.
On the Unesco website, it is stated that songket is a traditional Malaysian hand-woven cloth made by women in the Malay Peninsula and Sarawak.
The term songket refers to the decorative weaving technique used to make cloth, which involves the insertion of gold or silver threads between the base threads.
Extra yarn appears to float over the colorful woven background to create an ornamental effect. Songket is woven using a cake, a traditional two-tiered loom. The final product is a fine fabric that is produced from months of skillful hand weaving by expert craftsmen.
This weaving technique that has been around since the 16th century is passed down from generation to generation, and the songket style can be recognized by the design patterns that use geometric shapes and organic elements, such as flowers, birds and insects.
Songket material is traditionally only worn by royalty and their families. However, today it is used by Malays across the country in traditional ceremonial attire, for royal installations, weddings, births, celebratory occasions and official state events.
Although songket weaving is always firmly in the hands of women, men also support it by making looms.
Malaysia has submitted songkets to UNESCO since March 2020.
In this trial, Indonesia proposed gamelan as a Cultural Heritage of Humanity and has been accepted by Unesco.