The US government has imposed investment and export restrictions on dozens of Chinese companies, including leading drone maker DJI, for involvement in the suppression of the Uyghur Muslim minority or aiding the military.
Ummatimes - The new move by President Joe Biden's administration has further escalated tensions between the world's two top economies.
The United States blamed DJI and seven other technology companies for supporting "biometric surveillance and tracking" of Uyghurs, so the U.S. Treasury added them to a list of entities with suspected ties to the Chinese military and barred Americans from trading in their securities.
Separately, the Commerce Department added the Academy of Military Medical Sciences and 11 of its research institutes to a trade blacklist, which restricts access to US exports. The agency is considered to make "brain control weapons", but the definition of the technology is not explained. 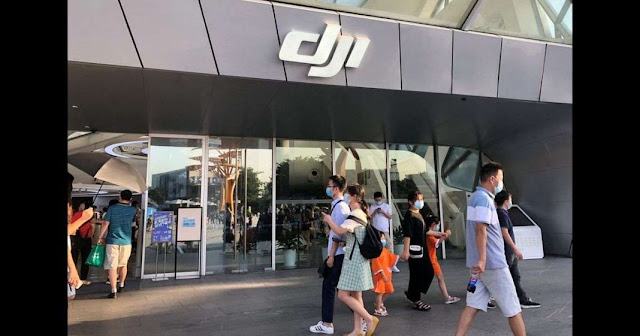 The department also added HMN International, previously Huawei Marine, Jiangsu Hengtong Marine Cable Systems, Jiangsu Hengtong OpticElectric, Shanghai Aoshi Control Technology, and Zhongtian Technology Submarine Cable to its list of charges of stealing or attempting to steal technology from the United States to help modernize the Liberation Army. People.
The Chinese embassy in Washington called the move "unwarranted repression" and a violation of free trade rules. "China's development of biotechnology has always been for the welfare of mankind. The US accusations are completely baseless," embassy spokesman Liu Pengyu said in an email.
It also said Beijing would take all measures to uphold the interests of Chinese companies and research institutions.
UN experts and rights groups estimate that more than a million people, mainly Uyghurs and members of other Muslim minorities, have been detained in recent years in Xinjiang's sprawling camp system.
China denies rights abuses in Xinjiang and has resisted US "interference" and vowed to protect its companies from US sanctions.
Commerce Minister Gina Raimondo said China chose to use biotechnology "to pursue control over its people and its suppression of members of minority ethnic and religious groups."
"We cannot allow U.S. commodities, technology and software that supports medical science and biotechnical innovation to be diverted to uses that are contrary to U.S. national security," it said in a statement.
Thursday's announcement coupled with last week's investment ban on Chinese facial recognition company SenseTime could worsen already strained relations between Beijing and Washington, even as President Joe Biden in a November virtual meeting with Chinese leader Xi Jinping tried to build a "guard fence" to keep the two countries apart. superpowers slide toward conflict.
Last Thursday, the Senate passed the Uyghur Forced Labor Prevention Act. Biden said he would sign it into law. The bill would ban imports from China's Xinjiang region because of concerns about forced labour.
The investment ban, which will also apply to Megvii Technology Limited and Cloudwalk Technology, was first imposed by the Donald Trump administration and revised by Biden.
Trump has barred US entities from investing in dozens of Chinese companies with alleged links to the defense or surveillance technology sector, including leading chipmaker SMIC to oil producer CNOOC.
The eight companies added to the list on Thursday are already on the so-called entity list. The list has become a go-to tool for Washington in the US-China technology feud. Suppliers to companies on the list must seek special permission from the Department of Commerce to deliver goods to the companies they are referred to.
Beijing and Washington have clashed over several issues, including US criticism of China's expanding nuclear arsenal and the Biden administration's decision to boycott the 2022 Beijing Winter Olympics, citing human rights abuses in Xinjiang.
Chinese telecommunications equipment company Huawei Technologies made it to the entity list in 2019. Submarine cable maker HMN Technologies was added later that year.
Washington is becoming increasingly concerned about the security threats posed by the company's role in building underwater internet cables, which have far greater data capacity than satellites.
Last year, HMN sent a proposal to Pacific Island countries to participate in a communications improvement project in the region. Beijing has said it has no intention of using its wired infrastructure for spying.