US urges Cambodia not to give recognition to Myanmar's junta

US urges Cambodia not to give recognition to Myanmar's junta

US State Department counselor Derek Chollet urged Cambodia not to grant any recognition to Myanmar's military junta when Cambodia assumes the chairmanship of the Association of Southeast Asian Nations (ASEAN) next year. Chollet, during his brief visit to Phnom Penh on Friday, called on Cambodia to continue to exclude Myanmar's junta officials and urged the country to advance and uphold the peace plan by ASEAN.
"We expect any approach that actually brings results, it's not just something that is an acknowledgment with the junta," he said.
Ummatimes - Chollet further explained that the United States, which still has an embassy in Myanmar, is not against the approach taken by either party - as long as it has clear objectives. "We want to see real progress on the ground," he said.
Chollet's remarks came days after Cambodian Prime Minister Hun Sen said Myanmar officials should be invited back to the ASEAN meeting, following an unprecedented exception to this year's summit. 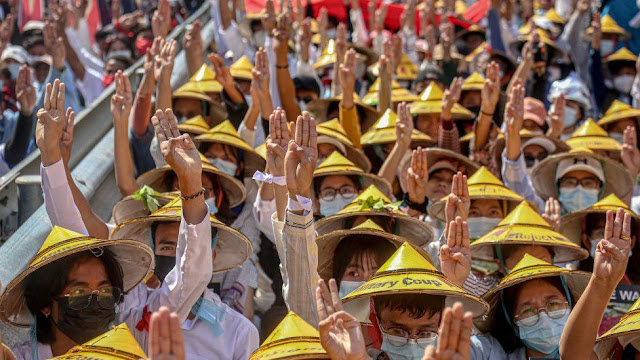 Myanmar has been in crisis since General Min Aung Hlaing toppled the civilian government led by Nobel laureate Aung San Suu Kyi on February 1, 2021. A military coup prompted widespread protests and armed uprisings that have been marked by repression and violence.
The military argued that the takeover of power was in line with the constitution and that the opposition were terrorists. Min Aung Hlaing was not invited to the ASEAN summit in October led by Brunei Darussalam, because he was deemed to have lacked cooperation in implementing the peace plan agreed by the association.
ASEAN expressed disappointment that the special envoy who had been appointed to assist in resolving the Myanmar issue was not given access to visit the country to meet all relevant parties, including Suu Kyi, who is now sentenced to prison.
Myanmar's military-appointed acting foreign minister visited Cambodia and met with Hun Sen on Tuesday, a day after the junta came under global criticism for sentenced Suu Kyi to two years in prison on charges of sedition and violating Covid-19 rules. Meanwhile Hun Sen, who faces criticism from rights groups and Western governments for what they see as suppression of democracy, has also vowed to visit Myanmar.