Vladimir Putin: The collapse of the Soviet Union is the ruin of Russia

Vladimir Putin: The collapse of the Soviet Union is the ruin of Russia

President of the Russian Federation Vladimir Putin described the collapse of the Soviet Union three decades ago as fragments of the fall of "Russian history".
Ummatimes - Putin made this statement on Sunday (12/12) when his interview was broadcast by RIA Novosti television in a new program entitled "Russia. New History".
Quoted from Reuters, when the Soviet Union collapsed in 1991 Putin felt how he and the rest of Russia had to live below the poverty line. He considered the economic chaos left by the Soviet Union to make Russia very backward.

1. The fall of the Soviet Union hurt Russia's future

The failure of the Kremlin's economic reforms dragged the Soviet Union into an abyss of division. Unable to maintain unity and integration one by one the 15 Soviet Republics broke away.
Launching Reuters, President Vladimir Putin recalled his experience at that time where the Russian Federation had to inherit double-digit inflation from the Soviet Union. Due to this inflation, many development and community welfare programs were temporarily suspended by the government. 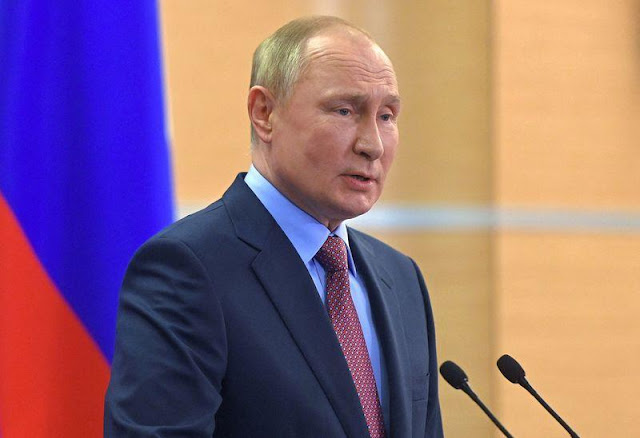 Even Putin, who is a KGB agent, had to swerve to become a taxi driver in order to make a living.
"Sometimes (I) have to work odd jobs and drive taxis. It's not nice to talk about this, but, unfortunately, it happens," Putin said.

Although Vladimir Putin never explicitly wanted to restore the former glory of the Soviet Union, his statements and policies said otherwise.
Putin is known to have branded the fall of the Soviet Union as "the greatest geopolitical failure" that has ever occurred in history, as reported by Reuters.
Since sitting in the presidency, Putin has begun to actively mobilize many of Russia's foreign and military policies so that they are equal to their predecessors, namely the Soviets. One of the striking policies is foreign involvement in Syria.
The existence of the State of Syria is actually a historical ally of Russia/Soviet Union thanks to the cooperation that was built by both parties during the Cold War era. Now Russian-Syrian relations have grown even closer since Russia's 2015 intervention and Moscow's geopolitical expansion to show its fangs again.

In an article published by the Kremlin in early 2021, Putin said that Ukraine is an integral part of Russian history and culture. The brotherhood that the Russian and Ukrainian peoples built continued to be close especially when both were part of the Soviet Republic.
However, after 1991, Ukraine increasingly drifted away from Russian influence despite good relations between the two. Everything changed 180 degrees when Russia occupied Crimea and was involved in the 2014 Ukrainian Civil War.
The New York Times reports, Russia-Ukraine relations are now getting worse especially with the threat of invasion which has received warnings from the West. The mostly Western-dominated G7 group, Sunday (12/12) agreed not to remain silent if Russia did invade Ukraine.
Although Ukraine looks unlikely to be friendly with Russia in the near future, President Vladimir Putin always believes that one day all his wishes will come true.