Affected by rumors of fake elections, Nicaragua's president is sworn in for a fourth term

Affected by rumors of fake elections, Nicaragua's president is sworn in for a fourth term

Nicaragua's President Daniel Ortega was sworn in for a fourth consecutive term on Monday (10/1/2022) evening local time. The inauguration came hours after the United States (US) and the European Union (EU) imposed sanctions on a number of figures in Ortega's government for sham elections.
Ortega won the general election on November 7, 2021 after most of his political opponents were jailed. This sparked widespread criticism. US President Joe Biden called the election a "pantomime" and accused the former Marxist guerrilla and Cold War foe of fostering authoritarianism.
Ummatimes - Most Western countries and the region avoided inauguration ceremonies on Monday night. But left-wing leaders such as Venezuelan President Nicolas Maduro and Cuban President Miguel Diaz Canel flew in to show their support. China, which has recently established ties with Nicaragua, also sent a delegation to the country.
Ortega's speech focused largely on the history of the Sandinista uprising against former US-backed dictator Anastasio Somoza. Ortega then vowed to continue to cultivate dreams and build roads for the people of Nicaragua. 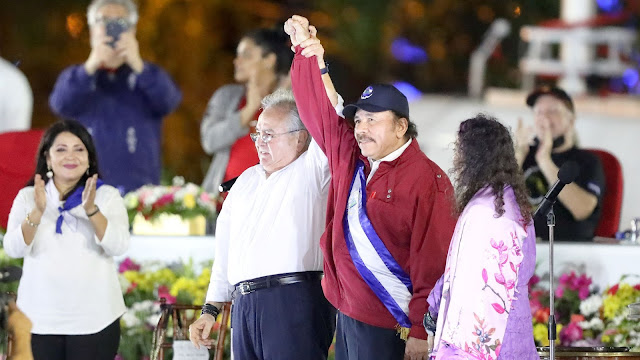 But the opposition says the leader now leads a government similar to Somoza, who was ousted by left-wing Sandinista guerrilla Ortega in 1979. Costa Rica's former president, Laura Chinchilla, called Ortega a dictator ahead of the swearing-in ceremony.
"He showed his back to those who didn't vote for him, isolated from a world that didn't recognize his election, under a legacy of horror and pain," Chinchilla said on Twitter.
Analysts say Ortega's first stint in power ended in 1990 and after returning as president in 2007, he quickly began to take control of key state institutions. Election observers from the EU and the Organization of American States were not allowed to observe the November election and journalists were barred from entering Nicaragua.