The Israeli military launched air strikes against Hamas in the Gaza Strip. The attack was in retaliation after a day earlier rockets fired from Gaza landed in the Mediterranean Sea.
Ummatimes - The Israeli military said Saturday night's strikes hit a rocket-building facility and a Hamas military post. "As fireworks light up the skies to celebrate New Year's 2022 around the world, a different kind of fire comes from Gaza terrorist rocket fire at Israel," the Israeli military said in a tweet on Sunday.
"In response, we recently attacked Hamas sites in Gaza, including the manufacture of military postal rockets used for terrorist activity." 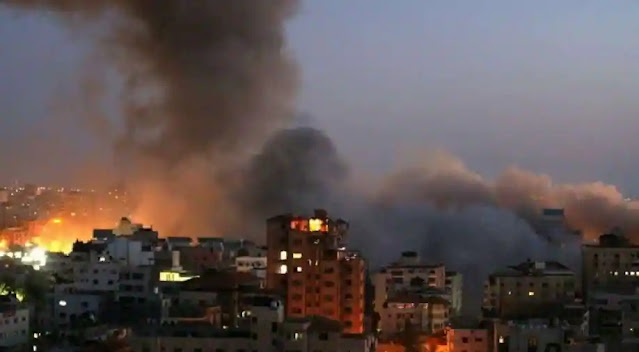 It was not clear whether the rockets from Gaza on Saturday were meant to hit Israel. But Gaza-based groups frequently test seaward missiles.
Hazem Qassem, a spokesman for Hamas, told Al Jazeera that some of the areas targeted by Israeli attacks included agricultural land. "We will continue to fight back, carry out the task of defending the people and liberating our land and sanctity," Qassem said. "We will continue to fight until the people's goals are achieved."
There were no reports of casualties from last Saturday's attack. According to the Israeli military, no sirens were sounded and Israel's Iron Dome rocket interception system was not functioning.
Since the ceasefire that ended the war between Israel and Hamas in May, there has been no cross-border rocket fire. But there is one incident that occurred last September.
The truce, brokered by Egypt and other mediators, is in danger of breaking down. Hamas says Israel has not taken serious steps to ease the blockade imposed on Gaza with Egyptian help when the group seized control of the coastal enclave in 2007.
More than 260 Palestinians, mostly civilians and children, and 13 Israelis were killed in the May attack on Gaza. At that time Israel carried out relentless airstrikes across the coastal area, prompting Gaza fighters to fire rockets at Israeli cities.
Israel has blockaded Gaza, restricting movement out of the territory which is home to two million Palestinians. Egypt also maintains restrictions on the enclave. Both reasons for tightening because of threats from Hamas over the restrictions.
The blockade restricts the movement of goods and people into and out of Gaza. As a result, the economy in Gaza slumped to the detriment of the two million people who live there.