The attorney general for the state of New York has charged Donald Trump's two children, Donald Trump Jr. and Ivanka Trump, testified in an investigation into the former US president's company business practices.
The subpoena for Trump from the office of Attorney General Letitia James is disclosed in a Manhattan court filing Monday, January 3, 2022.
Donald Trump has also been summoned to testify under oath.
Lawyers for the family late Monday asked the judge overseeing the dispute over the investigation to drop James' "unprecedented and unconstitutional" request for their testimony. 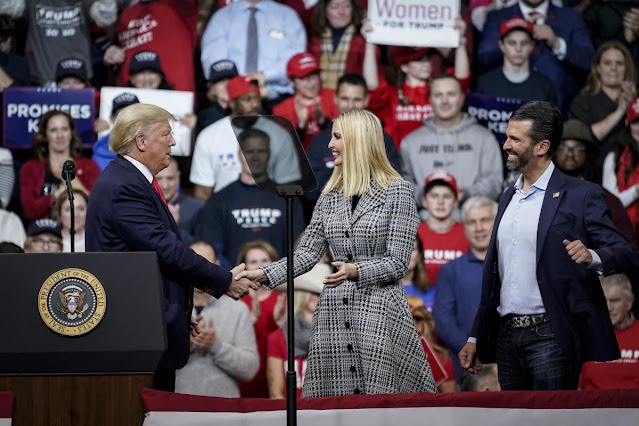 They also asked the judge to block subpoenas until Manhattan district attorneys complete a related criminal investigation that James participated in last May.
James' subpoena reflects an escalation of his nearly three-year investigation into whether the Trump Organization fraudulently inflated the value of his real estate holdings to obtain bank loans, and reduced them to lower his tax bill.
The investigation focused on properties including the Seven Springs Estate in Westchester County, New York, the office building in downtown Manhattan, the Trump National Golf Club in Los Angeles and the Trump International Hotel and Tower in Chicago.
Alina Habba, Donald Trump's attorney, in an emailed statement accused James, a Democrat, of "arming his office" through a "political witch hunt" that violated the former Republican president's constitutional rights.
"His actions are a threat to our democracy and I plan to hold him fully accountable," Habba said.
Another son of Donald Trump, Eric Trump, was questioned by James' office in October 2020.
Donald Trump passed the Trump Organization over to his grown sons and the company's longtime chief financial officer, Allen Weisselberg, when he became president in 2017.
Ivanka Trump also worked for the Trump Organization, before serving in the White House as a senior adviser.