Losses due to recent flooding in Malaysia are estimated at at least RM 20 billion.
"This figure is based on estimates of damage to households, personal property and damage suffered by businesses and industries including the destruction of shops, warehouses and factories," climate change activist Shaqib Shahril said in Kuala Lumpur on Monday.
He said the total loss to households alone could exceed RM1 billion.
Ummatimes - Shaqib's predictions are based on an independent study on the financial prospects of floods conducted in December. Official data from the Ministry of People's Welfare shows 19,711 families have been evacuated as a result of the disaster as of December 21, 2021, at 3:30 p.m. local time.
"Based on this, the loss is estimated at RM985 million, almost reaching the RM1 billion mark, it could even be higher as the actual number of affected families is unknown," he said. 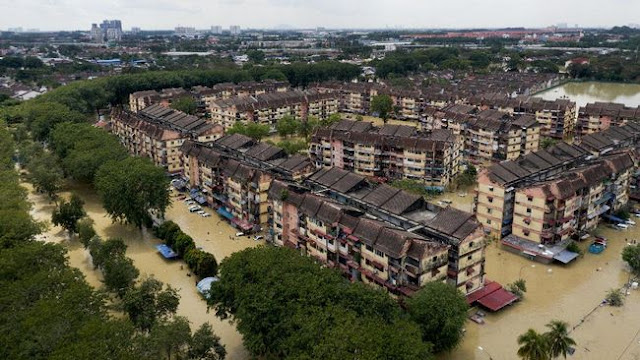 He said the flash floods in the Klang Valley (Selangor, Kuala Lumpur and surrounding areas) had bigger implications for Malaysia's economy and gross domestic product (GDP).
However, he is still waiting for more complete data to estimate the real financial implications of the flood disaster because the rainy season has not yet reached its peak.
Meanwhile, an economic analyst from Universiti Kuala Lumpur (UniKL) Business School, Prof Madya Dr Aimi Zulhazmi Abdul Rashid, said the flood that hit the Klang Valley had an impact on Malaysia's economic recovery because Kuala Lumpur and Selangor were the biggest contributors to GDP.
Selangor and Kuala Lumpur so far account for more than 40 percent of Malaysia's GDP.
He said the Malaysian government needed to act quickly to overcome this crisis so as not to disrupt the economic recovery process and create a new crisis.
The Ministry of Finance in its November report said Malaysia's GDP increased 3.0 percent in the first nine months of 2021 compared to a 6.4 percent contraction in the same period 2020.
Selangor Chief Minister Amirudin Shari said the Selangor government had handed over aid worth RM1,000 to each flood victim since December 28, 2021.
To date, 2,531 people in nine regions -- Petaling, Klang, Hulu Langat, Kuala Langat, Kuala Selangor, Sepang, Gombak, Sabak Bernam and Hulu Selangor -- have received this assistance.
"The government also provides kitchen assistance, gas and others to reduce the burden faced by flood victims," ​​he said.
The Selangor government also waived a month's water bill, installments on a business loan from the Selangor Hijrah Foundation (Hijrah) and mobilized almost all assets consisting of 1,672 vehicles and 14,511 people to help with the flood disaster.