The Ministry of Defense of South Korea (South Korea) announced that a man who crossed the South Korean border into North Korea (North Korea) is believed to be a North Korean citizen. The man defected to South Korea in 2020 in the same area.
South Korea's Joint Chiefs of Staff (JCS) said that it had carried out a search operation after detecting the person on the eastern side of the Demilitarized Zone (DMZ) that separates the two Koreas on Saturday last week.
"The authorities consider the person to be a North Korean defector and are in the process of verifying the relevant facts," the Ministry of National Defense said in a statement.
Ummatimes - A ministry official later said it believed the man, who was in his 30s, came to South Korea in November 2020. "The footage shows him having an identical appearance and attire to those who defected from North Korea in 2020," the official said. 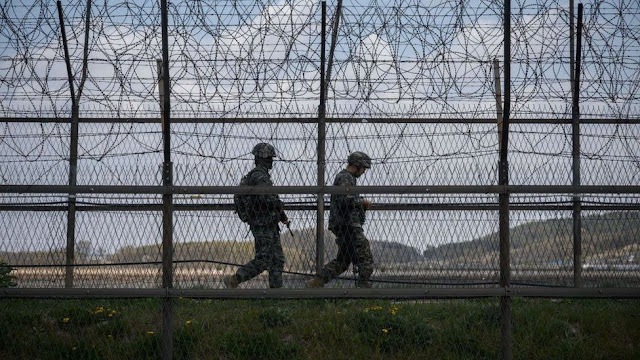 Investigators are also observing movement detected on the north side of the border. North Korean troops are known to have come to escort the man. But at this time, the South Korean government does not consider it a case of espionage.
South Korean media have reported that the man had experience as a gymnast who helped him climb the fence. But the official said they could not confirm that.
The official said the North had acknowledged South Korean messages on the inter-Korean hotline about the incident, but had not provided further details on the man's fate. The illegal border crossing in South Korea comes as North Korea has implemented strict anti-coronavirus measures since closing the border in early 2020, although it has yet to confirm any infections.
In September 2020, North Korea apologized after its troops shot dead a South Korean fisheries official who went missing at sea and burned his body in what it said was an anti-pandemic precaution. Two months earlier, North Korea had declared a national emergency and closed a border town after a North Korean defector with reported Covid-19 symptoms illegally crossed back from the South.