British Foreign Minister Liz Truss holds a meeting with Russian Foreign Minister Sergey Lavrov in Moscow, Thursday (10/2/2022). They discussed the ongoing crisis on the Ukrainian border.
Ummatimes - On that occasion, Truss said, Russia needed to withdraw troops, including its military equipment, from its border with Ukraine. "We need to see troops and equipment stationed on the Ukrainian border moved elsewhere because they are currently in a very threatening position," Truss told a news conference after meeting Lavrov.
According to him, Lavrov had assured him that Russia had no plans to attack Ukraine. "But we need to see those words followed up with action," Truss said. 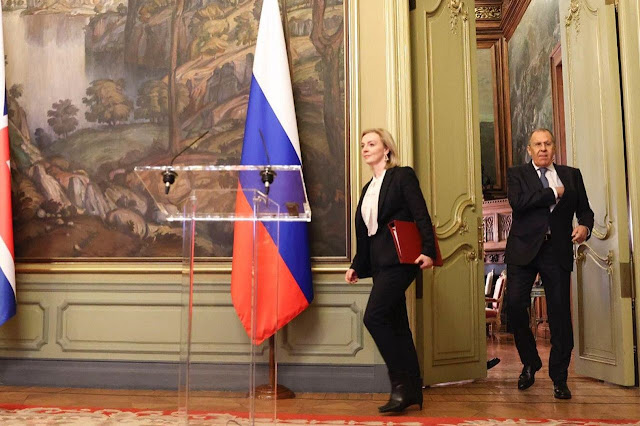 Meanwhile Lavrov said he was "disappointed" by the talks. He said security issues of concern to his country were put aside. "I feel like our colleagues either don't know the explanation our president has given or they completely ignore it," he said.
The meeting between Lavrov and Truss took place as Russia held joint military exercises with Belarus, which borders Ukraine. On the other side of the border, Ukraine is also holding military exercises. These activities further increased tension on the Russia-Ukraine border.
Russia has denied allegations by the North Atlantic Defense Organization (NATO) that it had any intention of attacking Ukraine. However, Russian President Vladimir Putin said NATO and the United States (US) had ignored their country's demands for security guarantees.
"Let me note that we carefully analyzed the written responses received from the US and NATO on January 26. However, it is clear, and I informed the Prime Minister about it, that Russia's fundamental concerns were ignored," Putin said at a joint press conference with the Prime Minister. Hungarian Minister Viktor Orban on February 1 last, reported the Russian news agency, TASS.
Putin said there was no adequate response to Russia's three main demands. The demands were about preventing NATO expansion, non-placement of attack weapons near Russian borders, and returning NATO military infrastructure in Europe to the position it was in 1997. In that year the Russia-NATO Founding Act was signed.
"At the same time, ignoring our concerns, the US and NATO generally refer to the right of countries to freely choose the means to ensure their security. But this is not just about giving a person the right to freely choose how to ensure their security," Putin said.
According to him, it is a part of the principle of security that cannot be divided. "The second inalienable part says that no one should strengthen their security at the expense of the security of other countries," Putin said.