French President Emmanuel Macron said claims of the withdrawal of Russian troops from the Ukrainian border needed to be verified. The French presidential office stressed that the start of the de-escalation movement would be in line with Macron's talks with Russian President Vladamir Putib in Moscow last week.
“There are dynamics that must be verified and consolidated. Everything is very fragile," said a statement from the French Presidential Office, reported by Alarabiya, Wednesday (16/2/2022).
Ummatimes - Macron held a telephone conversation with US President Joe Biden. In a telephone conversation that lasted about an hour, the two presidents underlined the importance of coordination in policy-making regarding Russia.
"A week after President Macron's trip (to Moscow and then Kyiv), we have several reasons for hope," the French presidency said in a statement. 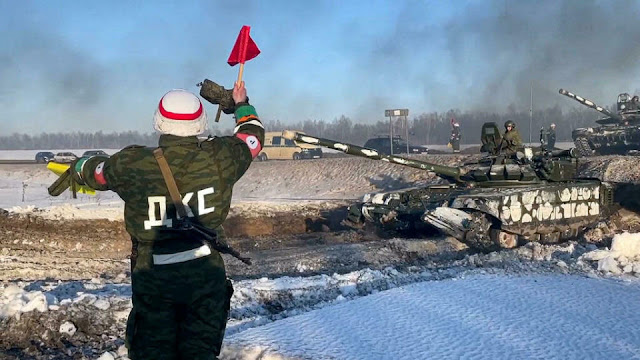 Russia has more than 100,000 troops near the Ukrainian border. Russia denies Western accusations that it is planning an invasion. But Moscow said it could take unspecified "military technical" action unless their set of demands were met. One of them prohibits Kyiv from joining the NATO alliance.
Russia's Defense Ministry on Tuesday (15/2) said some military forces had returned to bases having completed combat training missions. But the large-scale Russian-Belarusian military exercises will last until February 20.
A spokesman for the Russian Defense Ministry said large-scale drills across the country were continuing. However, several units of the southern and western military districts have finished training and are starting to return to base.
Video footage published by the Ministry of Defense shows several tanks and other armored vehicles being loaded onto a train carriage. The Interfax news agency reported that Ukrainian Foreign Minister Dmytro Kuleba said Kyiv would believe in de-escalation after seeing Russia's withdrawal.