A total of seven countries will hold talks in Vienna, Austria, on Tuesday (8/2), to continue negotiations on Iran's nuclear program. This round is the last chance to revive the 2015 Nuclear Treaty.
Finally, the nuclear talks in Vienna were postponed at the end of last month for a consultation break. Now, "the eighth round of talks attended by China, France, Germany, Russia, Britain, Iran and the United States will resume tomorrow in Vienna," EU spokesman Alain Matton wrote on Twitter.
Following months of uncertainty, the negotiation process to revive the 2015 Nuclear Treaty has progressed in recent weeks.
Ummatimes - Not long ago, the US relaxed the embargo that allows international nuclear agencies to cooperate in non-military fields. This is considered a "good step, although not enough," said Iran's Foreign Minister, Hossein Amirabdolaahian, Sunday (6/2).
According to a Foreign Ministry spokesman in Tehran, lifting sanctions "in favor of Iran is a red line of negotiations," said Saeed Khatibzadeh. "Washngton's move has no impact on Iran's economic situation," he added. 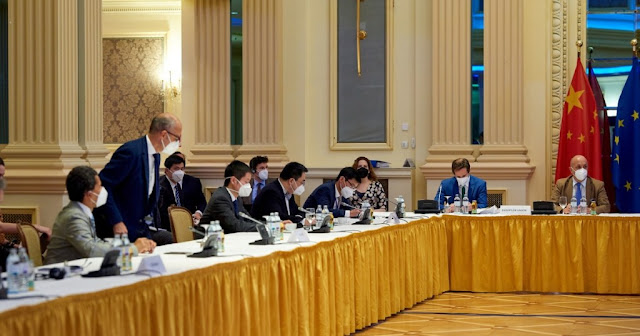 Tehran has consistently violated the terms of the agreement by enriching uranium since former US President Donald Trump withdrew its support in 2018. Iran, however, denies accusations that it wants to build nuclear weapons.
"Decisive moment"
German Chancellor Olaf Scholz said the outcome of the talks would be completely "dependent on Iran," he said in an interview with the US daily, the Washington Post, Monday (7/2).
"We have to send a clear message that now is the time to make decisions and progress, not delay the process," said Scholz. "This is the most decisive moment and we believe we can take this opportunity."
But "we don't have much time," he added.
In a press statement, the Iranian Foreign Ministry, on the other hand, assigned Washington the responsibility. "What the United States will bring to the talks in Vienna tomorrow will determine whether we can reach an agreement," Khatibzadeh said.
"We've made significant progress in various areas of the Vienna negotiations," including assurances from the United States not to violate the treaty again as Trump did.
"We hope that what were assumed to be positive statements can turn into action and we can agree on a fair deal in Vienna."
On Sunday (6/2), Iran's top security official, Secretary of the National Security Council, Ali Shamkhani, said Washington and Tehran had so far succeeded in making "balanced" commitments in the talks in Vienna.
Meanwhile, the US State Department said its decision to suspend sanctions on Iran's civilian nuclear program was not a sign of slack, but rather a technical step needed to return to the 2015 Nuclear Agreement.
The suspension of the embargo frees international companies involved in Iran's nuclear program, as long as it is for civilian purposes, without having to worry about US sanctions.