Japanese Foreign Minister Yoshimasa Hayashi met with United States (US) Foreign Minister Antony Blinken on the sidelines of the Quad conference in Melbourne, Australia, Friday (11/2/2022). They discussed a number of issues, including the ongoing tensions on the Russia-Ukraine border.
Ummatimes - In a joint statement, Hayashi and Blinken expressed grave concern over the deployment of the Russian military to the Ukrainian border. "(Japan and the US) have consistently supported the sovereignty and territorial integrity of Ukraine," the two foreign ministers said as stated in a press release released by the Japanese Ministry of Foreign Affairs, quoted by Anadolu Agency.
Hayashi and Blinken will continue to closely coordinate the development of the situation on the Russia-Ukraine border. The United States and the North Atlantic Defense Organization (NATO) have accused Russia of planning to attack Ukraine. That's because Moscow has deployed more than 100,000 troops to the border region with its neighbors. Russia has denied the allegations. 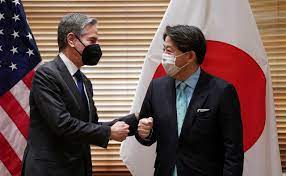 However, on Thursday (10/2/2022), Russia began joint military exercises with Belarus near the Ukrainian border. This activity further exacerbated the situation on the ground. On the same day, Ukraine also held military exercises on its borders. “Ukrainian armed forces are ready. We are capable and we will not give up a meter of Ukrainian land without a fight," said Ukrainian army chief Oleksandr Syrskyi when asked by Sky News if he had a message for Russian troops participating in the Belarusian joint drill.
Meanwhile, in the Quad meeting, apart from Hayashi and Blinken, the foreign ministers of India and Australia were also present. One of the focuses that will be discussed at the meeting is the expansion of China's military and economic influence in the Asia Pacific.
Hayashi and Blinken said they opposed China's unilateral claims to the East and South China Seas. "(We) will continue close coordination in dealing with various issues related to China," they said in a joint statement.
"(We) agreed to continue close coordination between Japan and the US and deepen cooperation with like-minded countries such as Australia, India, ASEAN and Europe towards realizing a 'Free and Open Indo Pacific,'" Kayashi and Blinken said.