US President Joe Biden has said that a Russian attack on the Ukrainian state is still very likely. Joe Biden said Moscow's claim that it was pulling some of its troops from the border still needed to be verified.
Biden's hesitation led him to a telephone conversation with French President Emmanuel Macron. According to Biden, fact-checking still needs to be done, as Russia still has more than 150,000 troops circling Ukraine.
Ummatimes - The French presidential office said the two Western leaders spoke for an hour about coordination and policies being taken towards Russia.
When giving a presidential address at the White House, Biden himself said that America prefers diplomacy and does not want Russian citizens to be hurt. However, the US has provided Ukraine with weapons and will send troops to protect allies. 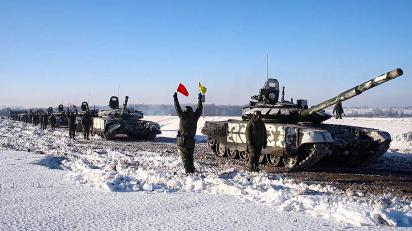 "To the Russian people: you are not our enemy, and I don't believe you want a bloody and destructive war against Ukraine," Biden said.
On Tuesday, Russia's Defense Ministry claimed it had withdrawn some of its troops on the Ukrainian border. The move was taken after some of the troops were said to have finished holding military exercises.
Previously, there were rumors that an attack on Ukraine would take place on February 16, 2022. President Volodymyr Zelensky responded to the issue with skepticism, but declared the day to be a day of unity for Ukrainians.