Less than a month after leaving Honduras, former president of Honduras arrested in drug case

Less than a month after leaving Honduras, former president of Honduras arrested in drug case

Honduran police detain former President Juan Orlando Hernandez after the US requested his extradition in a suspected drug smuggling case, Tuesday, February 15, 2022.
Ummatimes - The police escorted him from his home in handcuffs and chains. According to the US, there has been a dramatic decline in drug shipments from South America just weeks after Hernandez left power.
In a live broadcast broadcast on national TV, police officers gave Hernandez a bulletproof vest and put a chain between his wrists and handcuffed ankles before taking him to the police special forces post in Tegucigalpa, the capital. 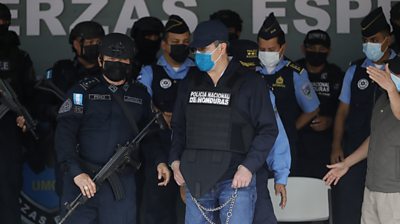 Hernandez sat at the table where doctors carried out medical examinations in front of the media, including unbuttoning his shirt to place a stethoscope on his chest, according to a live image by HCH Noticias.
The detention of the former far-right leader came after a Honduran judge on Tuesday ordered his arrest following a US extradition request for drug and arms trafficking.
A US Embassy document, seen by Reuters on Tuesday, shows that US authorities accused Hernandez of participating in a drug trafficking scheme between 2004 and 2022.
The document alleges Hernandez was part of an operation to receive tons of cocaine from Colombia and Venezuela, which would be shipped to the United States.
Hernandez accepted millions of dollars in bribes in exchange for shielding the smugglers from investigation and prosecution, the document said. Charges of firearms include carrying, using, or aiding and abetting the use of weapons, including machine guns.
Hernandez, 53, who was replaced as president last month by leftist Xiomara Castro, has pledged to cooperate with the national police. He has denied any wrongdoing.
Hernandez was due to spend the night at the police station and appear before the court on Wednesday morning.
Washington's extradition request stands in stark contrast to the period when the US government saw Hernandez as a key ally in Central America's volatile eight years in power.
Ramon Sabillon, Honduras' security minister, said Hernandez's arrest was a "historic" achievement, even though the former president walked out of the house and surrendered.
"The government has shown that it has the determination to comply with the law," Sabillon said. Earlier on Tuesday, the minister said that Castro had ordered him to comply with the law and informed him.
The Honduran National Police said Hernandez was detained in collaboration with US agencies, particularly the Drug Enforcement Administration (DEA).
The State Department said it was policy not to comment on extradition requests. A spokesman for the US Attorney's Office in Manhattan declined to comment.