British Foreign Secretary Liz Truss said the North Atlantic Defense Organization (NATO) had a number of positive proposals to discuss with Russia. It is still related to the ongoing tensions on the Russia-Ukraine border.
“Russia can work through the NATO-Russia Council to increase trust and transparency on issues such as force posture. NATO put forward a positive proposal, which we would like to discuss with Russia," Truss said at a joint press conference with Russian Foreign Minister Sergey Lavrov in Moscow, Thursday (10/2), quoted on the website of the Russian news agency, TASS.
Ummatimes - Truss said NATO had submitted these proposals to increase transparency and confidence. "I want us to continue the conversation," he said.
However, he stressed that progress cannot be achieved at the expense of Ukraine's sovereignty and territorial integrity. It also cannot be achieved at the expense of NATO's open-door policy. 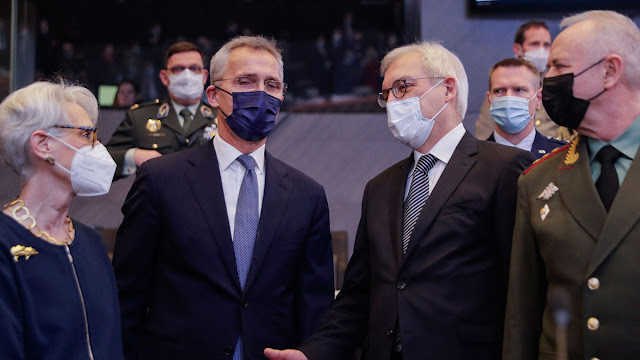 In a meeting with Lavrov, Truss had asked Russia to withdraw troops, including military equipment, from its border with Ukraine. "We need to see the troops and equipment stationed on the Ukrainian border moved elsewhere because they are currently in a very threatening position," he said.
According to him, Lavrov had assured him that Russia had no plans to attack Ukraine. "But we need to see those words followed up with action," Truss said.
Meanwhile Lavrov said he was "disappointed" by the talks. He said security issues of concern to his country were put aside. "I feel like our colleagues either don't know the explanation our president has given or they completely ignore it," he said.
Previously, Russian President Vladimir Putin had said that NATO and the United States had ignored their country's demands for security guarantees. Putin said there was no adequate response to Russia's three main demands. The demands were about preventing NATO expansion, non-placement of attack weapons near Russian borders, and returning NATO military infrastructure in Europe to the position it was in 1997. In that year the Russia-NATO Founding Act was signed.
NATO and the US are known to have expressed support for Ukraine in the face of a potential Russian attack. However, Moscow denies having any intention of launching aggression against its neighboring country.