Protests on the Covid-19 Vaccine Mandate Widespread, from Canada Now in Various Countries

Protests on the Covid-19 Vaccine Mandate Widespread, from Canada Now in Various Countries

The anti-vaccine truck driver demonstrations that took place in Canada inspired other demonstrations in a number of countries across continents. They gathered to oppose the rules of limiting the pandemic.
In New York, dozens of workers staged a protest from the Brooklyn Bridge to City Hall carrying giant United States and Canadian flags on Monday, February 7, 2022. Firefighters and teachers were among those who were threatened with dismissal if they refused to inject vaccines.
Ummatimes - More than 100 truck drivers in Alaska, United States, also staged a rally in support for the demonstration in Canada on Sunday, February 6, 2022. Brands demonstrated by driving from Anchorage to Eagle River.
Meanwhile, trucks and caravans blocked roads near parliament in Wellington, New Zealand, on Tuesday 8 February 2022, to protest the Covid restrictions and vaccinations. Hundreds of vehicles were parked in the parliament building and others circled the city center honking their horns. 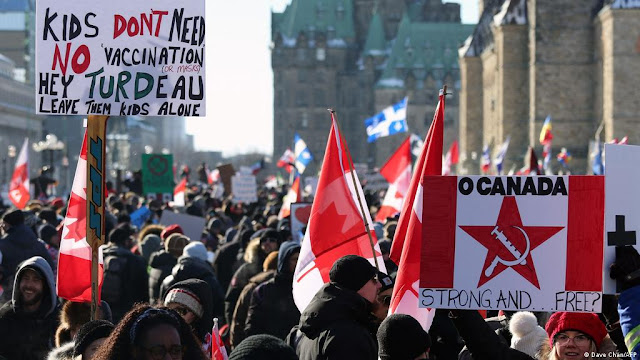 About 1,000 more protesters who also carried the Canadian flag convoy in the city of Wellington. "I was actually vaccinated but I was against the mandate of people to be vaccinated. I think it's a shame, to force vaccination on people who don't want it," said a person named Stu Main, reports France 24.
On the mainland of the blue continent, a call circulated on Facebook for protesters to descend on Paris, France, for anti-mandatory demonstrations this weekend. Similar calls have also spread in Belgium.
Previously, Canada imposed a law requiring truck drivers to inject two doses of the coronavirus vaccine. Because they crossed Canada's land border with the United States.
The truck drivers' demonstrations began on January 28, 2022, and their impact has cost the two countries hundreds of millions of dollars' worth of daily trade, from livestock to auto parts.
A memorandum of understanding drafted by some of the protesting truck drivers asks the Senate and governor general to resign if they do not agree to lift all Covid-19 restrictions, including vaccine mandates, vaccine passports and coronavirus-related fines.