The United States (US), Australia, Japan, and India or an alliance called the Quad pledged to deepen cooperation to ensure the Indo-Pacific region is free from coercion by any party. The US Secretary of State, Antony Blinken, emphasized that the US axis in the Asia Pacific will continue to burn.
"That includes fighting for the right of all countries to choose their own path, free from coercion and the right to have their sovereignty and territorial integrity respected. Be it here in the Indo-Pacific, in Europe, or anywhere else in the world," he said in remarks. opening meeting.
Ummatimes - The four foreign ministers also discussed climate change, Covid-19, and other threats. They also pledged to work on humanitarian aid, terrorism, cyber and maritime security to global supply chain challenges. 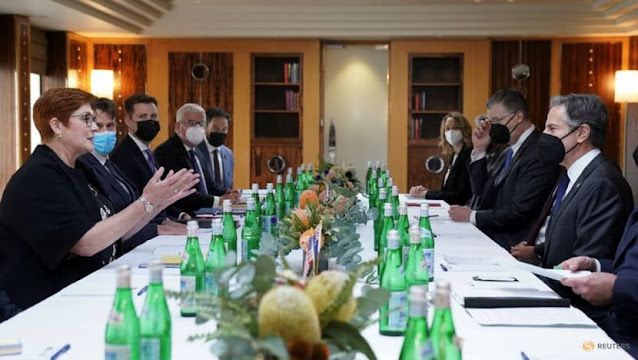 Although outside the purview of the group, the escalating crisis between the West and Russia over Ukraine was also a key issue in the talks. Blinken alluded to Moscow's troop building on the border with Ukraine as a challenge to the international rules-based order.
Blinken arrived in Australia as Washington was in a stalemate with Moscow. The Biden administration wants to show the world that its long-term strategic focus remains on Asia-Pacific and that a major foreign policy crisis in one part of the world is not diverting it from its top priorities.
Asked by reporters on Friday (11/2) whether a confrontation with China in the Indo-Pacific was unavoidable, Blinken replied that nothing was unavoidable.
"Therefore, I think we share the concern that in recent years China has acted more aggressively domestically and more aggressively in the region," he said.
Meanwhile, Australian Foreign Minister Marise Payne said Quad's cooperation on the Covid-19 response in the region was the most critical thing. He also said that cyber and maritime security, infrastructure, climate action and disaster relief especially after the recent Tonga volcanic eruption were also the focus of the Quad.