This is not a scene from the movie Snakes on a Plane, but a snake in the plane cabin actually happened on an AirAsia flight from Kuala Lumpur to Tawau, Malaysia, reported Free Malaysia Today, Friday, February 11, 2022.
Ummatimes - The incident occurred on Thursday, when passengers saw a snake in the plane's cabin. This led to the pilot making the decision to land the plane to Kuching.
A video showing the snake's silhouette has been circulating on social media since Friday morning.
In a statement, AirAsia's chief safety officer Liong Tien Ling confirmed the incident, but said no one was injured. 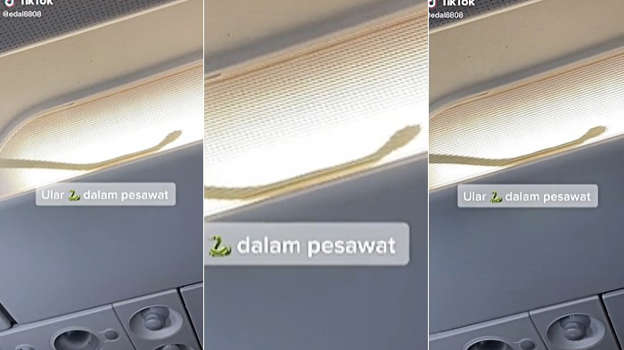 Liong said that as soon as the pilot learned of the incident, he made the decision to divert the plane to Kuching as a precaution to catch snakes and bloat the plane.
"This is a very rare incident that can happen on any aircraft from time to time," said Liong.
"The captain took appropriate action and the flight resumed to Tawau as soon as possible."
“The safety and security of passengers and crew is always our top priority. There is no safety risk to guests or crew.”
It is not yet known what kind of snake it is, as AirAsia ground staff are still looking for it.
An AirAsia spokesman told FMT that affected passengers were taking other flights to get to Tawau.