The fighter plane crashes, the commander of the Japanese military base apologizes, the 2 pilots of the F15 jet have not been found

The fighter plane crashes, the commander of the Japanese military base apologizes, the 2 pilots of the F15 jet have not been found

On the third day after the crash of the F15 fighter jet into the ocean, the 2 pilots were still missing and the commander of the Komatsu Japan military base apologized to Mayor Katsue Miyashi at Komatsu City Hall for the accident.
The members of the Japanese self-defense force (SDF) searching along the coastline were frustrated and believed in the return of the two while confirming the debris.
Ummatimes - Daigo Ishibiki, commander of the base, apologized to Mayor Katsue Miyashi at Komatsu Town Hall for the accident.
Commander Ishibiki, who visited Komatsu City Hall, bowed to Mayor Miyashi, saying, "We are very sorry for the great concern and inconvenience caused to the local government and residents around the base. I apologize directly for that." 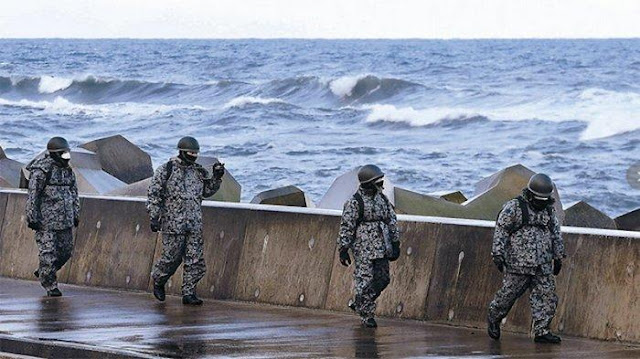 He explained that he would do his best to find the two crew members, thoroughly investigate the cause, and take all possible security measures. Chairman Shintaro Yoshimoto also visited the city council.
Commander Ishibiki also visited the Ishikawa Prefectural Government on the afternoon of February 2 to apologize and explain to Governor Masanori Tanimoto.
About 5 km from the base where the plane disappeared from the radar, rescue helicopters, helicopter-mounted escort ship of the Maritime Self-Defense Force "Hyuga", and submarine rescue ship "Chihaya" gathered and searched all night.
Along the Shinbo beach in Kaga City, four members of the base looked at the wave block next to the embankment and searched for the wreckage.
The SDF members repeatedly said, "I did my best to search, while bathing in the waves hitting the embankment."
A search was also carried out on Ataka beach in Komatsu city, and the members stared out at the sea, saying, "My friends' lives are at stake. I want to find clues as quickly as possible."
Matsuichi Nagahara (76) from Yatanomachi, Komatsu City, who visited the beach, prayed, "Today there is a barge and the waves are high. Sorry for the cold weather. I want you to find it soon."
A spokesman for the base said: "We will continue to search until we find him. We are doing our best."
It appears that the F15 crashed due to an abnormality in the very short timeframe immediately after takeoff.
So far, the parts found that appear to be parts of the vertical stabilizer have been found.
The first class commander of the flight instruction group based at Komatsu base, 1st class commander Koji Tanaka (52) and 1st class commander Ueta Ryusei (33) were on board. Both are still on the search, missing, not found.
Discussions on various Japanese military equipment were also carried out by groups of Japanese lovers. For those who wish to join please email to: info@tribun.in According to the Japanese defense ministry, the F-15 belongs to the Komatsu base tactical combat training group.
Tactical combat training groups, known as aggressor units, are staffed by elite pilots and play an enemy role in training for ASDF units across Japan.
The ASDF's F-15 fleet has had several accidents in the past.
In July 2011, an F-15 with Naha Air Base in Okinawa Prefecture crashed during a training flight over the East China Sea, killing its pilot.
Earlier in September 2008, an F-15 with Tsuiki Air Base in Fukuoka Prefecture crashed into the Sea of ​​Japan near Yamaguchi Prefecture, but no one was injured.