Turkey's red flag lights up buildings in the United Arab Emirates and soars high during a ceremony in Dubai on Tuesday (15/2). Turkish President Recep Tayyip Erdogan spent a second day in the once-hostile country repairing ties and deepening commercial ties.
Cavalry waving Turkish flags and pomp greeted Erdogan the day before for his meeting with Abu Dhabi's Crown Prince and de facto leader, Sheikh Mohammed bin Zayed Al Nahyan. The festivities continued in Dubai, which positions itself as the UAE's attractive tourism and finance globally.
Ummatimes - Erdogan was welcomed by Dubai's ruler and UAE Prime Minister Sheikh Mohammed bin Rashid Al Maktoum at the emirate's billion-dollar Expo site to celebrate Turkish culture and history at the World's Fair. Visitors to the Expo were given a Turkish red and white crescent and star flag to fly as Erdogan visited the Turkish pavilion after a Turkish musical performance under the exhibition's main dome. Standing in front of a select audience, Erdogan praised the UAE for being the first Arab country to host the World Exhibition. 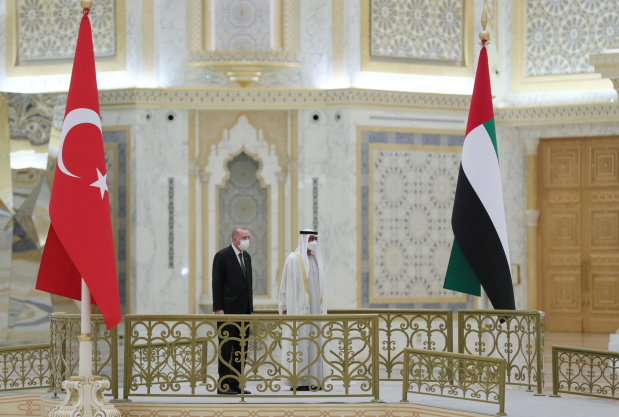 This furore is a striking pivot from just about a year ago. When the relations between the two countries deteriorated, prominent officials and government supporters from both sides exchanged insults and insults on social media and in media favoring one country.
Now, these same social media accounts are tweeting with hashtags praising the new bond. They shared videos of Emirati people speaking Turkish and fighting for a performance in Turkish by the Emirates' most famous singer Hussain al-Jasmi.
In addition, the world's tallest tower, Dubai's Burj Khalifa, is lit up in the colors of the Turkish flag to mark Erdogan's visit. Meanwhile commuters on Dubai's main thoroughfares drive under a sign praising the bilateral relationship.