Ukrainians wave the national flag and play the national anthem on Wednesday (16/2/2022). This show is to show unity against fear of a Russian invasion that the West claims is imminent.
Yellow and blue banners fly outside schools, hospitals and many shops to mark "Unity Day". This is a holiday that Ukrainian President Volodymyr Zelenskiy created this week after Russia amassed troops near the Ukrainian border.
Ummatimes - On Kiev's main Khreshchatyk boulevard, flags adorn government offices, an activity as usual for many. There are no signs of residents feeling restless or afraid.
"Just an ordinary day, but these flags are here for one purpose, to show that we are not afraid of anyone. They don't scare us," said Mykola, who operates a small coffee shop in the capital. 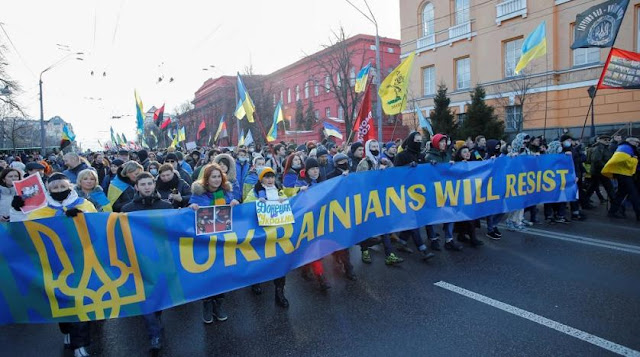 As for the Kiev Olympic stadium, dozens of people unfurled the 200-meter-long Ukrainian flag, waving it to the beat of patriotic music. "Everyone wants to scare us and we are here to stay," said a pensioner named Ludmila who wore a small Ukrainian flag on the collar of her coat.
A loudspeaker in a local government office blared patriotic songs. Meanwhile, state television and Youtube channels broadcast speeches and reminders that raised the spirit of Ukrainian nationality.
In a televised address, Zelenskiy said the Ukrainian people are united in a common desire to live in peace, happiness, with families, children with parents. "No one can love our home as much as we can. And only we, together, can protect our home," he said.