Political columnist Timur Fomenko thinks the EU Commission's ambitious idea to embargo Russia's oil and gas will destroy the bloc's member economies.
Ummatimes - Commission President Ursula Von Der Leyden said these measures would be implemented in stages over the year.
A number of member states have expressed their strong objections. Hungary said the embargo was like dropping a nuclear bomb on its country.
Slovakia, which is heavily dependent on Russian oil and gas, also objected. German industrial business circles also objected and were not prepared. 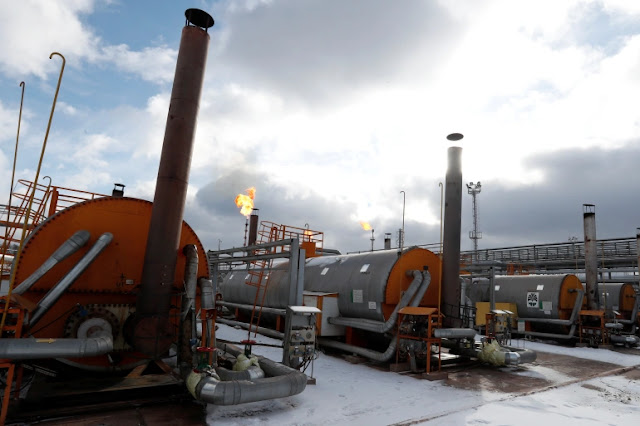 Timur Fomenko in his article in Russia Today, Sunday (8/5/2022) explained that crude oil prices quickly rose above $ 114 per barrel on Friday (6/5/2022) morning.
Moscow officials expect the EU bloc to still buy Russian oil through third countries and intermediaries.
It's a strategy that Iran is alleged to have used under a harsh American embargo for years.
Although the move is difficult, according to Fomenko, the EU will be the biggest loser of such an effort.
The proposed embargo reveals enormous strategic vulnerabilities in energy security.
This includes the ability of a country, or a group of countries, to secure access to energy resources when they are unable to produce enough of their own resources.
"When you consider how many wars the west has waged solely over access to oil supplies, including the two in Iraq, this is a huge problem," Fomenko said.

For the European Union, breaking oil dependence continues to be a difficult step that will exacerbate already soaring energy costs and inflation across the continent.
So how does the block find new supplies? Relying on other partners will bring new dangers?
In 2020, 29 percent of EU imported crude came from Russia, 9 percent from the US, 8 percent from Norway, 7 percent each from Saudi Arabia and the United Kingdom, and 6 percent each from Kazakhstan and Nigeria.
The elimination of the largest market, Russia, means the bloc must now increase its imports from the rest.
The natural candidates are, of course, the Persian Gulf countries. This means that the EU's strategic dependence on sustainable access to oil resources in the Middle East has increased drastically, increasing the bargaining power and political influence of these countries.
However, all the evidence so far suggests OPEC countries are benefiting from higher prices and are refusing to cooperate with western demands to increase production.
Economics is all about supply and demand. If supply decreases, but demand remains high (considering you can't live without oil) then prices will go up.
This explains why any seller in the world lowers prices when customers have no alternative for your important product?
The fact that Russia is part of OPEC+ further complicates matters. As a result, the EU has made grave mistakes in its foreign policy and has no contingency plans or strategies to deal with these emerging problems.

Right now, the bloc is determined to use Ukraine to try and impose a military defeat on Russia.
Meanwhile, it has also designated itself as an "Indo-Pacific" power, showing little initiative to avoid being sucked into Washington's confrontation with China in areas of the world that it is not based on.
This leaves the European Union with the option of partnering with India, but the country of 1.3 billion people is a pure energy consumer.
India is not a supplier – which, incidentally, is another reason why attempts to undermine New Delhi's relations with Moscow are likely to fail.
These all place a gaping hole in the EU's foreign policy in terms of strategic "energy security".
While seeking to reduce “strategic dependence” on Russia, they are simply creating a patched dependency in other regions, opening the door to new risks.
For example, how will a disorientated European Union policy toward Iran, which has involved nominal opposition to America's unilateral “maximum pressure” program over Iran's nuclear program, survive this crisis?
Can the EU avoid having to use Iranian oil? How, apart from that, will the European Union respond to Iran becoming stronger due to soaring oil prices, despite all the American sanctions?
That's before we even consider what happens if a crisis or another major conflict in the Middle East arises and disrupts oil supplies.
What will the EU do if Iraq returns to a state of insurgency and civil war?
Russia is too big a critical global energy source to ignore, which is why EU sanctions won't deal a crushing blow to the Russian economy.
If the proposed ban is gradual, then Russia will continue to make more in the short term while keeping prices up.
It just shows the EU is drastically undermining itself to appease US interests which have disproportionate power over its strategic and foreign policies.
To be sure, the US benefits from energy sanctions against Russia, but it does worse for European consumers.
In this case, these sanctions would do more harm to the EU itself than to Russia. This would be as painful economically as it would be a strategic disaster.
The block has no concrete alternatives and what's worse, it barely even considers such alternatives.
This would make the continent weaker, poorer and more vulnerable, threatening a dire repeat of the energy crisis of the 1970s, which inflation data showed was already underway.
European banking circles have already begun to feel the economic impact of EU policies in the Ukraine conflict.
The need to set aside cash to protect the expected economic consequences of anti-Russian sanctions has resulted in billions of euros in losses for European banks.
Lenders have so far received about $9.6 billion, led by Societe Generale and UniCredit.
ING and Intesa Sanpaolo report that Russian exposure has slashed their combined first-quarter net income by nearly $2 billion.
Several lenders said their outlook for the year would be overturned if the drag on the Russia-Ukraine conflict on the global economy worsened.
Intesa has reportedly cut its 2022 profit target, warning that a "very conservative" scenario envisages a harder hit.
“Corporate insolvency in our market is likely to escalate” in 2022 amid soaring energy prices, high inflation and supply chain disruptions, according to Commerzbank Chief Executive Officer Manfred Knof.